Musings on race, travel, and travelling while black 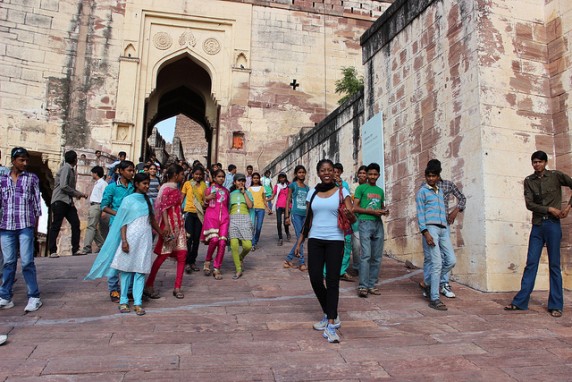 My thoughts on the intersection between race and travel, as well as my experiences as a black woman who travels.

I’ve been thinking a lot about race and travel lately.

You see, a post I wrote on Italy last week got a lot of attention– namely for my apparent misguided use of the term “pitch black” to describe  the vendors I encountered in Rome’s markets. A few comments on the post itself cited the usage as derogatory, offensive and irresponsible, and a poll of the followers on my Facebook page about the term produced a heated debate 70-odd comments long about othering, objectification, and just what constitutes offensive language when describing black people.

The funny thing is that I was (perhaps naively) unaware of the negative connotations the term has, particularly for African-Americans. I am Jamaican-Canadian: a black kid of Jamaican parentage who grew up north of the 49th parallel. I grew up in a multicultural Canadian city with a staunchly Caribbean upbringing, so I don’t know much about the Jim Crow laws, nor the history of racial segregation in the United States (though this past week I have been learning). While I am not unfamiliar with the spectrum of racial slurs, I’ve never operated in a landscape where the word “pitch” was one — to me it’s always been a word used to describe the depth of the colour black. Me playing mas at Caribana, a yearly festival celebrating Caribbean culture and heritage held in Toronto

Even though I only intended to paint a vivid picture of the Italian scene as I experienced it, I’ve since removed the term: as some readers pointed out, the description wasn’t essential to the narrative. Besides, I never want to be insensitive, reductive, or want to promote racial intolerance in anything I write.

But the incident reminded me that race is an extremely delicate and, at times, incendiary subject.

And this got me thinking about my race and how it affects my travels.

I am a black woman who travels extensively and blogs about it. As this blog has developed more of a following, I get a lot of questions in my inbox about every aspect of travelling. But one of the most frequent questions I get (usually from those who are black and female, just like me) is whether the people  in x country or y region are racist towards black folks.

The truth? I’m not entirely sure how to answer.

I’m not silly enough to think that our society is post-racial (the recent foolishness involving Paula Deen indicates racism is alive and well in 2013), but I would like to think that most human beings are inherently good.

But I mean, let’s get real: TWB (Travelling While Black) does affect my travels. Beyond the fairly superficial worry of where I would get my hair done when I moved to Mexico and Hong Kong, I’ve already written on a number of occasions about how my dark skin and dreadlocks get me noticed in places where people like me are scarce. (In this post, for example, I struggled with whether or not to feel offended that in Asia people were falling all over themselves to take a picture with me, the black girl with the “funny” hair.) My first set of dreadlocks In 99% of my travels, however, my experiences Travelling While Black have been positive. Yes, sometimes people stare, touch my hair without asking,  request I be in their photos. But if I’ve felt their interest to be borne of genuine curiosity, I don’t mind– though you are certainly within your rights if you do.

But there still is that one percent.  They only incidence of overt racism I experienced while travelling was in Dublin, which I wrote about here. Amongst other things, I was heckled by some Irish men as I walked down the street — they yelled out that I had a big, fat ass and told me to wiggle it so I could “show them what I was working with”. They yelled it out mockingly, in (poorly imitated) Ebonics, so I’m sure of the racist undertones. But it would be unfair and unwise to say that the all of Ireland is racist based on my three days in Dublin. And even if the whole country *were* racist, the landscapes, architecture, and scenery are beautiful, so I would happily go back to explore further if the opportunity presented itself.

Because here’s the thing: I’m not going to make someone else’s bigotry my problem; I refuse to let it stop me from seeing the world.  If something as inconsequential and uncontrollable as the colour of my skin is a problem for you — tough.

I was fortunate enough to grow up in an environment where I was made to believe that anything I wanted to achieve in life was possible.  I never had hangups about my dark skin or felt that being black made me inferior to anyone else. I had a mother who taught me that the world was my oyster, and so, as soon as I had the means to travel, I cracked that mollusc wide open and made a grab for that pearl.

(I hope that my travel stories will continue to inspire people to see more of the world, regardless of their colour, nationality, economic background, or creed.)

Has your race ever been an issue when it came to your travels? Have you ever been reluctant to travel to a place because you feared persecution or discrimination because of your racial background?

Links to posts on race and travel on “Oneika the Traveller”: